During this past year’s Star Wars Celebration in London, President of Lucasfilm Kathleen Kennedy stated that she and the producing team behind the upcoming Rogue One: A Star Wars Story were considering whether or not to open the Star Wars spin-off with the iconic opening crawl featured in every Star Wars film yet.

In an attempt to differentiate itself from the Skywalker saga, Lucasfilm has opted to open to forego the bombastic opening and give the film a more traditional opening. Kennedy told Variety:

“We felt that’s so indicative of what those saga films are. Initially, we probably will begin the film in a way that is traditional, with just the title.”

While I have a tremendous amount of respect and admiration for Kennedy, the superstar producer whose credits include films such as ET, Indiana Jones, and Back to the Future, I think this is a major mistake on her and Lucasfilm’s part. No doubt, Rogue One needs to stand out from the Skywalker film as it is to be a much darker chapter in the Star Wars universe. A war film to be exact. But the way in which the film should differentiate is not in the opening credits, but the actual film itself.

I’m not one to buy into the fear from the infamous reshoots, but this news along with Michael Giacchino replacing Alexandre Desplat as the film’s composer has me a bit unnerved. I won’t let it affect my excitement for the release of the film, though. I will be there opening night along with many other die hard Star Wars fans stuffing my face with popcorn and Reeses Pieces.

Pre-sale tickets are currently still unavailable. My expectation is that pre-sale tickets will go on sale during Thanksgiving this week when Lucasfilm debuts a new featurette during the Disney Magical Holiday Celebration on ABC. 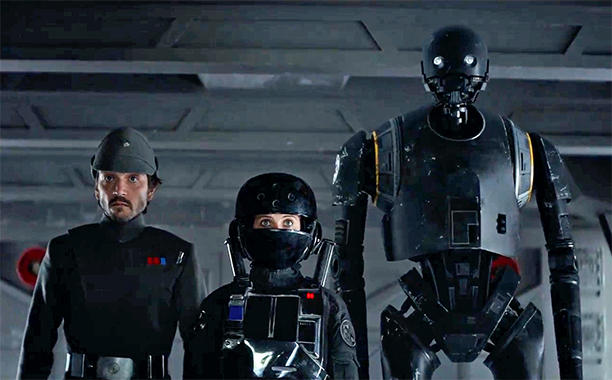