Sweet Christmas. Harlem’s hero is here and its about damn time. The new Marvel Netflix series Luke Cage made it’s debut over the weekend, crashing Netflix’s servers along with it. The bulletproof superhero is a well-written, well-cast series that continues to push the bounds of what is achievable on television. Mike Colter is a force as Luke. He wasn’t just playing Luke Cage. He is Luke Cage.

A hero meant to inspire hope and the battle for Harlem’s soul.

Sweet Christmas. Harlem’s hero is here and it’s about damn time. The new Marvel Netflix series Luke Cage made its debut over the weekend, crashing Netflix’s servers along with it. The bulletproof superhero is a well-written, well-casted series that continues to push the bounds of what is achievable on television. Mike Colter is a force as Luke. He wasn’t just playing Luke Cage. He is Luke Cage.

The first episode takes its time introducing us to the world of Harlem and the culture that is integral to the show. This is the first Marvel series that feels as if it not only takes place in our world, Luke Cage is now.

By the end of episode two, the story kicked into high gear and Luke began his journey to become a hero. The loss of Pops (Frankie Faison) was tragic but necessary. Luke needed his call to action and there couldn’t have been a more powerful way of thrusting him into the center of the drama. Luke knew the only way to shut down Cottonmouth (Mahershala Ali) was to destroy him one piece at a time until there was nothing left. But you could tell the clock was already ticking for the villains. These gangsters were doing a good enough job at tearing each other apart. Luke helped accelerate their downfall.

The fourth episode was no doubt one of the best in the series. The flashbacks were seamlessly integrated with the present day storyline and featured some incredible editing in the sequence where Luke punched his way out of prison in the past and the rubble in the present.

The villains of the show are a mixed bag but for the most part positive. Theo Rossi is a talented actor, however. His performance as Shades wasn’t that great at first. I don’t think he realized it, but the moment he stepped into the room with Mahershala Ali, he was gobbled up by Ali’s talent. Rossi was cheesy and seemed out of place. But as the episodes went on, especially once he started having scenes with Alfre Woodard, he evolved and elevated his performance to the same level as the cast around him.

Mahershala Ali as Cottonmouth gives Vincent D’Onofrio’s Wilson Fisk a run for his money. He was brilliantly unpredictable as the suave gangster at the top of Harlem. His sense of humor provided a levity that made him likable so when it came time for his origin story you truly felt for him. It’s hard not to feel sorry for the guy. It didn’t matter how high he rose in power; he would always be standing on that balcony looking down on the club’s musicians with envy. What moved me most about his character was the look of admiration in his eye whenever Luke was in the room. Luke possessed the integrity that he lost forever when he was forced to murder his Uncle.

Where the series faltered was the way in which its criminals were handled. Cottonmouth was dangerous. His goons, not so much. They were cheesy and it takes you out of the gritty realism that is present throughout much of the show. They sure did some shady stuff out in the daytime huh? But in a way that cheese factor helped lend itself to a Marvel meets The Wire sort of feel.

Alfre Woodard was exceptional as she played Mariah Dillard with tremendous conviction. As corrupt and as criminal as she was, I had so much respect for how far she was willing to go to improve Harlem. It was truly shocking when she murdered her cousin Cottonmouth. Nobody expected his death so early. It was disappointing to see such a talent exit with six episodes left to go but it made sense. Cottonmouths death was crucial to the destabilization of the criminal climate in Harlem. The show would have also risked feeling overcrowded with villains if he was still in the mix once Diamondback finally made his debut.

The midpoint of this series was unbelievable. From Luke being shot to Cottonmouths death, it was twist after twist after twist. My head was spinning. It felt like anything could happen at that point. No one was safe.

As grounded as this series was, even with super strength and cellular regeneration in the mix, it was the introduction of bullets made from alien technology that helped take this show to the next level while still remaining inherently street. Episode six felt like it could have been a finale but the twists of the sixth, seventh, and eighth installments helped set a new stage and rejuvenate the series’ life for the final five episodes, making this one of the most binge-worthy shows ever. (Daredevil should take note of this.)

The final five episodes were exceptional. We got to fully discover Luke’s backstory in Georgia and out came the heartbreaking truth about Reva. It had been frustrating me that we didn’t know more about the history of these characters as I was watching but the brilliant writers held back, waiting for the perfect moments to dole out the truth of the past, having the most impactful effect possible on the present.

Luke coming to the understanding that he wasn’t in love with Reva, rather he was infatuated with the idea of Reva was probably the most real moment in the entire show. Luke is good, though. He and Claire are already Mom and Dad.

The dynamic between Misty Knight and her Lieutenant was also impressive. Instead of Misty butting heads with the L.T. for the duration of the series, instead, she began to learn from her superior and grew because of it. Without that, I don’t think Misty would have been able to survive the series. Thank god she did because she is amazing. The way she was edited back into the crime scenes for her visions was incredible. 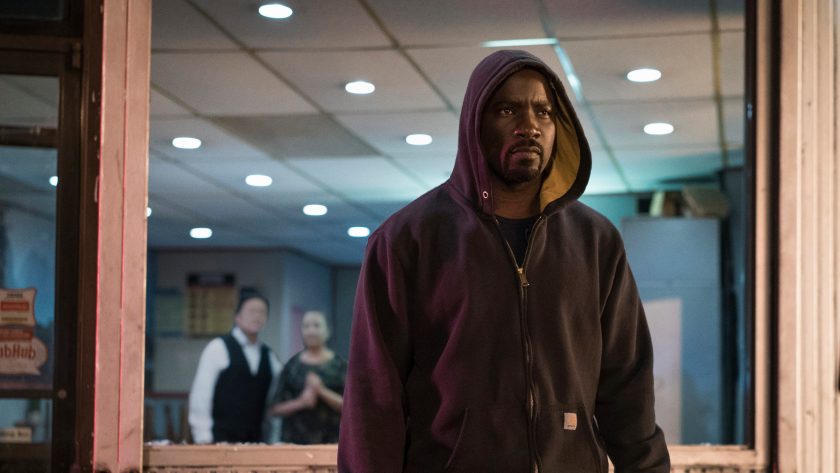 The end of the series was incredibly powerful and inspirational as a bulletproof black man in a hoodie became a hero. Luke battled for his and Harlem’s soul in the street with Diamondback (Erik LaRay Harvey), sporting a hammer tech suit that was a perfect adaption of his look from the comics. Diamondback was scary and entertaining but I thought he overplayed most of the time, however. He did come to play ball in the climactic showdown with Luke. The action in the Netflix corner of the MCU isn’t as epic as the feature films but that’s what makes it stand out. It’s raw and the fights are much more creative and artistic with the stunts and camera operation. How awesome was it when Luke delivered that last hit launching Diamond back into the air and leaving him nothing more but a broke ass?

What I loved the most about the finale is that all of the villains who were alive at the beginning were still alive at the end. In Luke Cage, the bad guys can win. We can assume we’ll see the return of Mariah Dillard and Diamondback in the inevitable second season.

Luke is heading back to prison but we know that isn’t going to last. 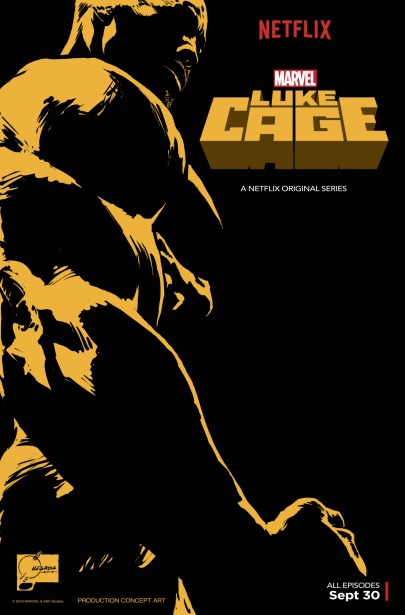 I see ‘Luke Cage’ as what I call ‘inclusive blackness.’ When I say that the show is ‘inclusively black.’ I mean that it is a deep meditation on our culture, but it’s done in such a way that when people watch the show, they don’t feel like they’re excluded from the story or the experience of watching the story.

The show features a mostly African-American cast and it’s incredibly refreshing. Even though the show is dealing with superpowers, theres something about it that feels more true to life than anything else Marvel has done in the past.

Coker also commented on the current state of racism in Hollywood.

The racism in Hollywood is not usually just ‘Oh, you’re black, you can’t do it.’ The new racism is not getting the benefit of the doubt, meaning that you’re not considered for projects because you’re black.

My hope is that the show will be looked back on as a milestone in entertainment history. One that paved the way for superheroes of all races leading their own films or television shows.

I’m currently nine episodes deep into the series and thoroughly enjoying it. Mike Colter is fantastic as Luke and Misty Knight(Simone Missick) is sure to be the fan favorite, however. The stand out performances are coming from the antagonists Mariah Stokes (Alfre Woodard) and Cornell Stokes a.k.a. Cottonmouth (Mahershala Ali).

To see what else Coker had to say head on over to the Baltimore City Paper.