Continuing the marketing push, EW has released a slew of new photos. The images spotlight all of the film’s characters as well as Darth Vader and a plethora of background characters while revealing key backstory information for the film.

Continuing the marketing push for the upcoming Star War spin-off Rogue One: A Star Wars Story, Entertainment Weekly has released a slew of new photos. The images spotlight all of the film’s characters as well as Darth Vader and a plethora of background characters while revealing key backstory information for the film. 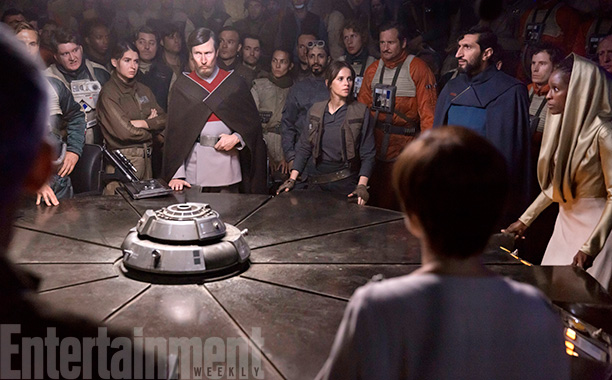 We now know the identities of several of the Rebel leaders spotted in the briefing room on Yavin IV in the trailers. Seen huddle around the table are Senators Jebel (Jonathan Aris, in red/grey), Vaspar (Fares Fares, in blue), and Pamlo (Sharon Duncan-Brewster, gold). 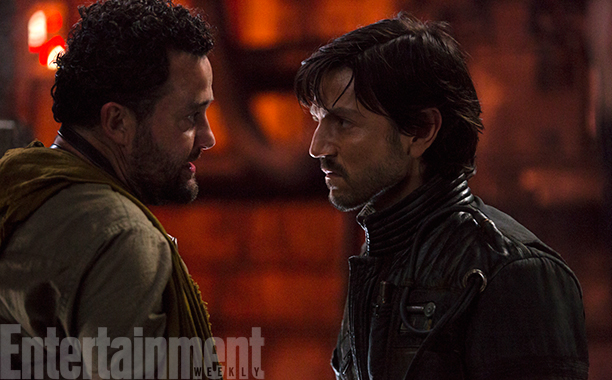 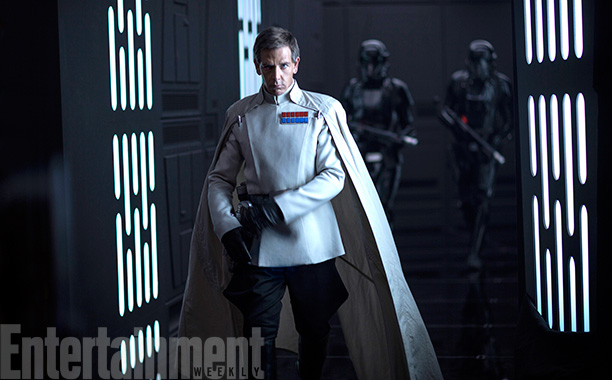 It turns out Moff Jerjerrod (Michael Pennington) wasn’t the only Imperial Commander who displeased his superiors while overseeing the construction of a Death Star. Director Orson Krennic (Ben Mendelsohn) is the visionary responsible for perfecting the Imperial superweapon. But his lack of faith in the force has left Darth Vader doubtful of his capabilities. Kiri Hart, Lucasfilm’s head of story development offered some insight:

As we saw in the original classic A New Hope, Darth Vader was never impressed with the technological terror that is the Death Star. Vader sees the bigger picture compared to his subordinates but nonetheless, the Sith lord also follows orders and there is nothing more valuable to the Emperor as the Death Star being that it would cement the Empire’s grip on the galaxy for the foreseeable future. Kiri Hart added:

“There are military men who are interested in a really effective piece of military hardware, and Darth Vader is a little bit beyond that, right. He’s tapped into something on another level, on a spiritual level. So, that’s part of the fun of Vader in the context of the Imperial Military. He’s got a broader perspective.”

The Empire Strikes Back showed us that failing Lord Vader results in death so there’s a good chance Director Krennic will be his demise via force choke due to his apparent lack of progress perfecting the Death Star.

The climactic battle of Rogue One is set to take place on and over top of the planet Scariff, home to the Imperial base where the Death Star was constructed. But before the rebellion can infiltrate the base, they first must destroy the shield gate. The planet of Scarrif is so valuable to the Emperor, he has it protected with a massive shield to prevent intruders from landing on the planet.

If you’ve been reading Catalyst: A Rogue One Novel, then you already know the lush green world seen in the trailers is the planet Lah’mu. Galen Erso (Mads Mikkelsen), an expert in Kyber crystals, fled there to avoid working on the Death Star with his longtime friend Director Orson Krennic. Sadly, Galen cannot escape his past and it’s only a matter of time before Krennic catches up to him with his squad of Deathtroopers to coerce Galen into helping perfect the Death Star.

EW also revealed that some of the infamous reshoots for the film were to add depth to the charactered of Bodhi Rook (Riz Ahmed). Rook is a former Imperial who defects to the Rebellion. His personality is described as a frenetic survivor. Apparently, Ahmed and Edwards looked to Dennis Hoppers nonconformist character from Apocalypse Now.

Last but not least, my personal favorite of bit today’s scoop were the comments from the film’s director Garreth Edwards commenting on what it was like to make a Star Wars movie after growing up a fan of the franchise. Edwards is the second director Lucasfilm has hired who has grown up as a Star Wars fan. Having a fan direct these films lends a level of passion that wouldn’t be present otherwise. Myself and I’m sure many of you felt like you were watching someone play with a set of Star Wars toys when witnessing the trailers for this new generation of Star Wars films. Both JJ Abrams and now Garreth Edwards have crafted experiences that allow longtime Star Wars fans to feel as if they have stepped through a trap door back into their childhood bedroom or basement, surrounded by all of their favorite Star Wars toys but this time with a whole new level of imagination thanks to the advancements the industry has made with visual effects.

Edwards expressed his joy even in the face of tremendous pressure, being the director responsible for an experimental Star Wars film:

“Even though there’s a lot of pressure on this movie, it’s really impossible to feel it because it reminds you so much of when you grew up and when you felt most comfortable. It’s hard to get intimidated when you can constantly look left and see a Stormtrooper or look right and see an X-Wing. It just feels like you’re at home again.” 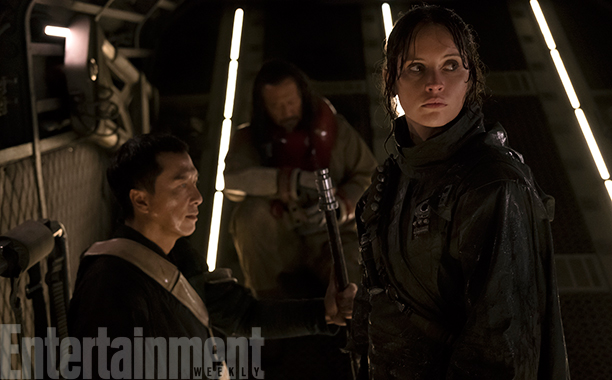 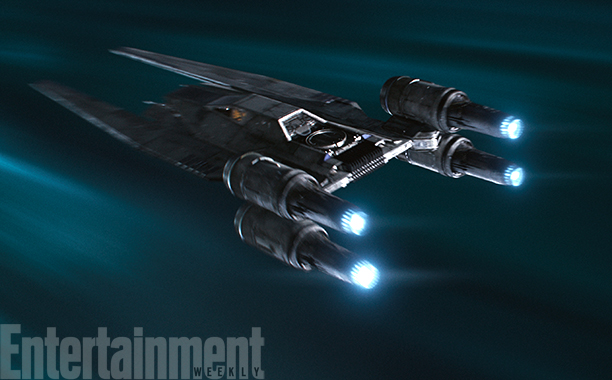 This week’s issue of Entertainment Weekly features our first look at Emma Watson while playing Belle in the iconic yellow dress from the upcoming live-action adaptation of Disney’s Beauty and the Beast.

This week’s issue of Entertainment Weekly features our first look at Emma Watson while playing Belle in the iconic yellow dress from the upcoming live-action adaptation of Disney’s Beauty and the Beast. The film set to release this March will be scored by Alan Menken who scored the original 1991 animated classic. The new adaptation will also feature three new original songs which the composer previously announced two of the tracks titled as: “Days in the Sun” and “Forever More”.

Watson recently spoke with EW and dropped a pretty big nugget of information revealing how the backstory for Belle has been retooled for the live-action adaptation. In the original Belle was a book-worm and her father, Maurice (Kevin Kline) was an inventor, however. In this version, it is Belle who is the inventor and her father constructs music boxes, each representing a different country, telling the story of Belle not traveling. After the loss of Belle’s mother, Maurice became over protective of Belle. The music boxes allow Belle to experience the rest of the world without actually traveling away from home.

In the animated movie, it’s her father who is the inventor, and we actually co-opted that for Belle. I was like, ‘Well, there was never very much information or detail at the beginning of the story as to why Belle didn’t fit in, other than she liked books. Also what is she doing with her time?’ So, we created a backstory for her, which was that she had invented a kind of washing machine, so that, instead of doing laundry, she could sit and use that time to read instead. So, yeah, we made Belle an inventor.

In this live-action re-imagining of the fairy tale, a young woman (Emma Watson) takes her father’s place as prisoner in a beast’s castle, only to fall in love with her beastly captor (Dan Stevens), who turns out to be a prince.

Disney also released high-resolution images of the spread from Entertainment Weekly including a look at Lumiere, Cogsworth and Mrs. Potts. 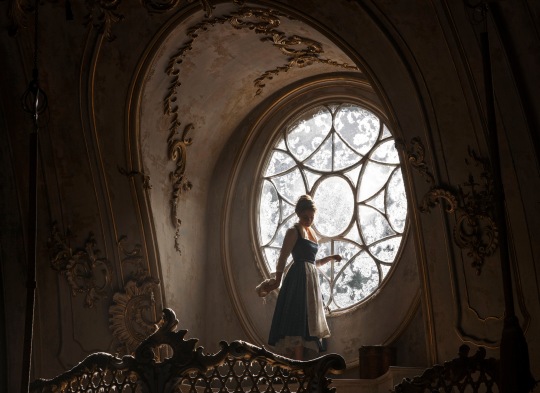 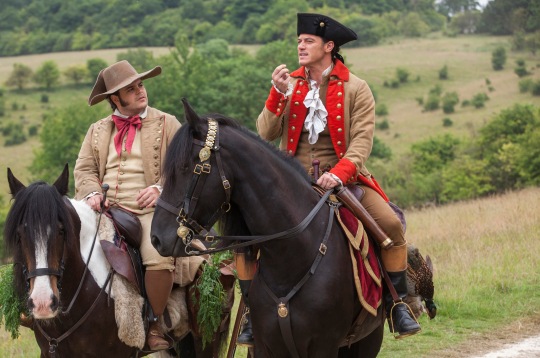 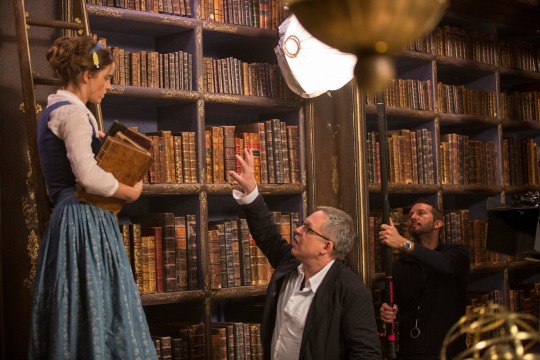 One of the biggest questions going into Rogue One: A Star Wars Story is how will director Garreth Edwards manage to capture the tension of the rebels spies stealing the Death Star being that we know they will succeed but most likely meet their demise before it’s all over.

One of the biggest questions going into Rogue One: A Star Wars Story is how will director Garreth Edwards manage to capture the tension of the rebels spies stealing the Death Star being that we know they will succeed but most likely meet their demise before it’s all over. Speaking with Entertainment Weekly, Edwards explained that rather than focusing on the film’s ending, the bigger challenge was determining just where to begin the story in a way that gets us invested in the new characters and still manages to fit into the Skywalker saga as the film will lead us up to the moments before the original classic A New Hope begins with Darth Vaders Star Destroyer, “The Devastator” chasing down Princess Leia on board the Tantive IV attempting to escape from the Empire with the newly stolen plans for the Death Star.

“The thing every [filmmaker] typically struggles with is ‘How does it end?’” says director Gareth Edwards (Godzilla). “But we knew how our film was going to end. Our problem became ‘How do we reverse engineer from that and know where to start?’ You’ve got a finite number of options and you go through them all like a puzzle to find the one that’s going to lead to the strongest result.” One of the most important pieces: Darth Vader, back to menace the deep reaches of space once again.

Edwards also spoke with USA Today about the origin of Jyn Erso (Felicity Jones), who’s father we know was taken away from her at a young age as he was the main scientist forced by the Empire to help develop the technology that powers the super weapon of the Death Star. The director explained Erso does have similarities to Luke Skywalker in that they are both initially reluctant heroes, however. The path that Erso will follow will be a very different one from the Jedi Master.

Events take place that just shatter her life and send her off to basically be raised as a soldier in the midst of a war. She ends up not the person she was supposed to be. Even though we’re not telling the story of Luke Skywalker, it was important to me that we capture the same themes and emotion, but the film doesn’t unfold how you think. It’s not the same path as Star Wars.